Thank you, thank you, thank you!
Les celebrated his 94th birthday on June 6th, 2021.
Les & Iris celebrated their 68th wedding anniversary on June 21st. They would like to thank everyone who sent a card, letter, gift or well wishes. You’re continued prayers for Les, Iris and the entire family would be greatly appreciated! 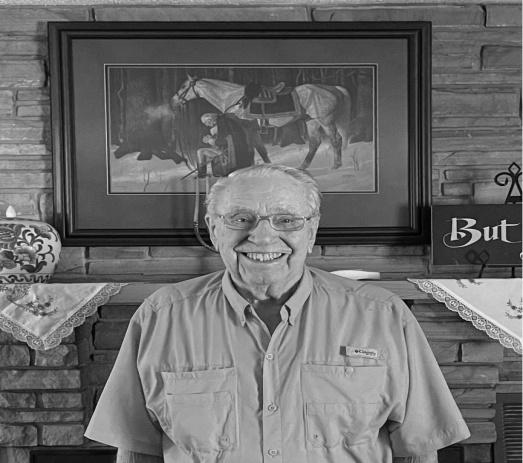 A memory shared from Iris

Although I had heard many tales from the “old folks” about mountain lions, in my growing up and our 46 years of ranching here in rural Eastern Oklahoma, I have only seen one. Many who have lived here their whole lives have never had that experience. Let me tell you about my face-to-face encounter…

My German shepherd, Neva, got very excited whenever I would get out my fishing rod because she loved to accompany me to the back 40. Partly because she enjoyed eating blackberries and would always beat me to the most ripe and juicy ones on the bush. On this particular trip, I had just come around a heavily wooded area and looked up to see on the pond bank, within ten yards, a large mountain lion intently watching some deer grazing beyond the west end of the pond. Fear caught me and I froze in my tracks, praying silently to God for help, unable to move a muscle. Like Hannah in the Temple, God heard my silent prayer and answered in the form of Neva bounding out of the woods and giving chase to the huge cat. The lion cleared the ravine, but Neva turned and came back to me after the mountain lion and the deer scattered. At this point I had composed myself and thought I was safe enough to go ahead and do a little fishing. Then I noticed in the sand on the bank, near a persimmon tree, baby cougar tracks. “I’m out of here!” I thought. A mountain lion is one thing, but a protective Mama Mountain Lion is something else! I thanked the Lord for His hand of protection. When I got home, I told Les about seeing the big cat and he grabbed the camera ready to take some pictures of the evidence. About halfway there, he tried to snap a picture of a rabbit and realized there was no film in the camera. So, back home we went. I hope that is as close as I ever get to a Mountain Lion in the wild and I’m so thankful that God protected me that day and every day since. God is so good! – Iris

A Note from Les

II Timothy 2:15 gives the basic fundamental for Bible Study. Rightly Divide! What does that mean? Separate the scriptures in a way that makes sense. To start with, the Bible is one Book, but we can separate (or divide) it into categories. The Scofield Reference Bible divides the Old Testament into four categories: Redemption, Organization, Poetry, and Sermons. What was designated by men as the “New Testament” contains the Four Gospels, Acts, Paul’s Epistles, and the book of Hebrews followed by James, Peter, and John’s Epistles, Jude and Revelation (also written by John). One thing to remember is of all these authors, only Paul is appointed as “The Apostle of the Gentiles.” Consequently, do not look anywhere except Paul’s letters for doctrine concerning Salvation, the Christian’s walk, or the Rapture. – Les

“It shall greatly help ye to understand the Scriptures if thou mark not only what is spoken or written, but of whom and to whom, with what words, at what time, where, to what intent, with what circumstances, considering what goeth before and what followeth after.” ~ Miles Coverdale

From “Gems of Grace Truth” by Joel Finck

Two of the smallest words in the Bible actually carry the greatest impact of how we understand Scripture. These two words are, “but now.” While the Bible is the Word of God from cover to cover, it was not all given at once or to the same audience. What was spoken to one group of people in an earlier time may not directly apply to another group of people in later times. This is called the principle of “Progressive Revelation,” and we find many examples of this in Scripture.

In Romans 3:21, the apostle Paul writes, “But now the righteousness of God without the law is manifested, being witnessed by the law and the prophets.” At one time, the law of Moses played an integral part in righteousness. Not that the law itself could bring righteousness, it could not. But before the dispensation of the grace of God was committed to Paul (see Ephesians 3:1,2), the law was God’s prescribed method of demonstrating the righteousness which comes by faith. In other words, if a godly Jew under the law wanted to show that he believed God, there was only one way to do it: be in obedience to the law. Therefore, while the law did not bring righteousness, keeping the law went hand in hand with living a righteous life.

But according to Romans 3:21, God’s righteousness is no longer associated with law-keeping.  This is why Paul goes on to proclaim, “for ye are not under the law, but under grace” (Rom 6:14b). Those who do not recognize the principle of progressive revelation continue to draw people back under the law with its sabbaths and ordinances. But let us rather move on in grace!

As we think about our Nation this Independence Day, it seems that there is plenty of dividing going on, but none of it “rightly”. We are dividing ethnically, socially, politically by education, income, and region. As the Body of Christ, we should know how to rightly divide the scriptures (II Timothy 2:15) but be unified in our Lord and Savior. Ephesians 4:2-3 With all lowliness and meekness, with longsuffering, forbearing one another in love; Endeavouring to keep the unity of the Spirit in the bond of peace.

Thank you to all who have supported and continue to support the ministry. As we have stated in the past, Les and Iris have planned for the teaching to continue as long as the Lord has a use for it. Therefore, we are taking steps to ensure those past recordings are restored in the best quality possible for another generation of Bible believers to glean from.

We are aware that the time changes with ION and some of the other networks have not been convenient for many viewers, but we pray that the new stations we have added and will be adding will make the program available at an acceptable time. Fortunately, many can record or watch on YouTube or one of the streaming channels. Even though the programs are older, we do our best to keep up with new technology and make “Through the Bible” available in several formats. Please pray with us that the Lord will continue to open doors for new opportunities to share the Gospel of Grace!

I had a little tea party, one afternoon at three; twas very small, three guests in all, just I, myself and me. Myself ate up the sandwiches, while I drink the tea; was also I who ate the pie and passed the cake to me.

The older folks might smile to see this little diddy again. Les and I smile when we think of tea and our folks (deceased now). When Les took me up to Iowa, his mother asked me how to make iced tea because they, like most Iowans at that time, always had hot tea. She had never had iced tea, just as my mother had never had hot tea. So, I was privileged to teach my northern Mother-in-law that all she had to do is add ice and water and Bingo! They loved it! Now, I have found that many folks down here in Oklahoma have never tried hot tea so I am privileged to teach them how to have a cup of hot tea before adding the ice and, bingo! – They love it!

Don’t know the name of what you’re looking for? Look through our Catalog ›